New content over at the Meekrat Entertainment Group.
Posted by Mike Podgor at 12:00 AM

Third Attempt is going on a brief hiatus. Terribly sorry.
Posted by Mike Podgor at 1:14 AM No comments:

A Pinky and the Brain Halloween 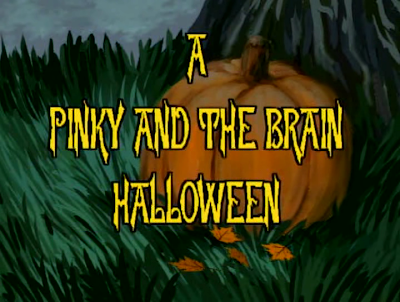 The first special I'll be taking a look at is “A Pinky and the Brain Halloween”. If you're unfamiliar with “Pinky and the Brain” and are too lazy to look it up, it's a show about two genetically altered lab mice who want to take over the world. Well, one wants to take over the world. The other is pretty much just along for the ride. It started off as a segment on a show called “Animaniacs” and received its own spin-off when the WB network was launched. As such, we get the episode we're looking at today.

The episode begins in the middle of one of the Brain's plots to take over the world. It's Halloween, and he's invented a device which allows him to transmit via Jack O'Lantern and control the minds of children. The trick-or-treating scene is pretty nifty, what with the costumes and all: 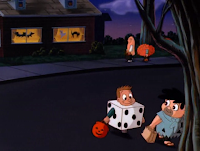 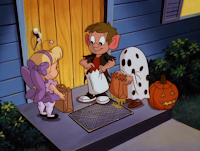 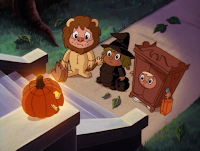 Of course, the plan fails, and the Brain laments that he's tried everything short of selling his soul to take over the world. Usually, this would elicit no response, but since it's a Halloween episode there's a glowing red breeze and a man calling himself Mister Itch appears. The man knows an awful lot about the Brain, including the fact that he once decided to chuck it all in favor of a failed rhythmic gymnastics career, and wants to help him take over the world. In order to prove his sincerity, Itch gives Pinky a trial wish. Pinky wishes for a radish rose whatchamwhozits, and Itch complies by turning the Brain into a melon ball thingamabob. The Brain seems convinced, but changes his mind and storms back to the lab. Itch thinks there may be another way... 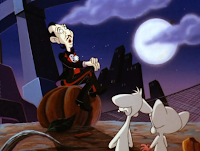 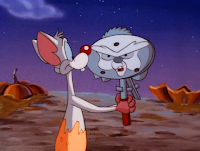 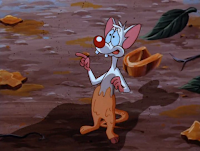 Later, Pinky returns to the lab as well, and wonders if Itch could really do all the things he promised. The Brain sarcastically replies that yes, Itch probably could, but the Brain can just wave a magic pencil and suddenly the world will be his.

To his surprise, he waves a magic pencil and suddenly the world is his.

As it turns out, this is not because of a magic pencil, but rather because Pinky sold his soul. To the Devil. At this point, I think I should tell you that the spin-off aired in prime time. I doubt they could get away with Pinky selling his soul to the Devil on Saturday mornings, at least not as overtly as this. Mister Itch takes Pinky away to Hades, and while Brain seems initially upset that Pinky is gone, he thinks his newfound status will get him through it. Why shouldn't it? He has everything he ever wanted: the affection of the world's population, supreme control, and his nemesis Snowball acting as his jester. 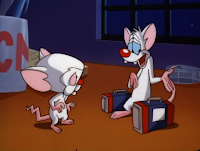 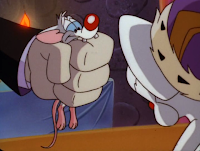 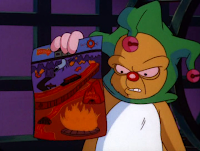 Not all is well, however, as the Brain continues to miss Pinky, trying to mask this feeling by claiming he just wants to know where Pinky kept the food pellets. Snowball suggests he go to Hades, and gives the Brain a map which guides him through the Department of Motor Vehicles and into the Underworld. Brain makes it into Hades after masquerading as a fatally malnourished Rush Limbaugh, and after exclaiming “YES!” at the gates, wonders why he's celebrating since he's now in Hell. 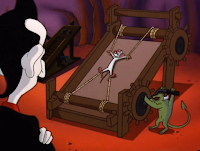 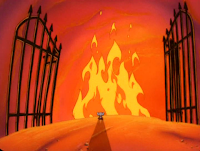 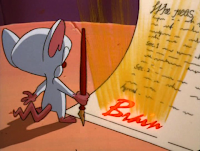 Pinky, meanwhile, is enjoying all the tortures Mister Itch can throw at him. He claims that the only real torture is being separated from his best friend, and who should choose that moment to show up but the Brain? He demands Pinky leave Hades with him, citing his need for food pellets, but Itch won't let Pinky go without a fight. The Brain challenges him to rhythmic gymnastics, and Itch calmly insinuates that he invented that “infernal sport”. What's more is that, if the Brain wins, he'll get Pinky but lose the world and forfeit any future attempts to take it over. The Brain still accepts the challenge. 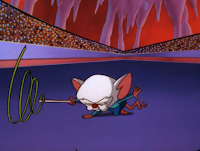 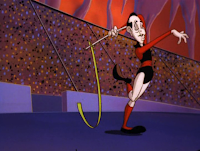 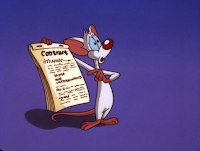 While the Brain does well, earning a perfect ten, Itch gets an eleven, claiming that while he promised the Brain a challenge, he never promised that it would be a fair one. Pinky and the Brain have a tearful good-bye, but Pinky take solace in the fact that he'll get the radish rose whatchamwhozits promised to him by Itch. As it turns out, Itch doesn't know what a radish rose whatchamwhozits is, and so the contract for Pinky's soul is null and void. Itch takes affront at this, turns into a more traditional demonic Devil, and chases Pinky and the Brain out of Hades. They manage to escape back to the lab, where Snowball is displeased, having also made a pact with Itch. With that, the Brain vows to try to take over the world again the following night, and all is right with the world. 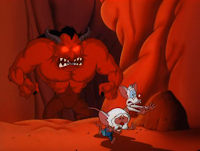 With this synopsis, I've managed to completely eradicate most of the actual humor from the episode. That's the problem with reviewing something that's actually good: you can't make snarky comments along the way. Well, you can, but it's futile. This was an exceptional episode of the show, and a pretty good Halloween special to boot. Really, though, with a cartoon about a lab mouse who sells his soul so his friend can rule the world, it either has to turn out really well or really terrible. I'm happy to say it's the former. If you'd like to see the actual episode, it's on DVD, the link which follows. I suppose you could also find it through other, nefarious means as well. Just don't sell your soul.

Well, Halloween is now less than a month away, and I've decided to get into the holiday spirit by reviewing Halloween episodes of TV shows. What makes a Halloween special, you ask? Well, the first clue is that it'll usually have "Halloween Special" in its name somewhere. However, very few of the shows I have on DVD saw it fit to have Halloween specials, so I shall have to get creative. The criteria, as thus, is that all shows must fall into at least one of the categories below:
1) They have to have the word Halloween or something in the title of an episode
2) They have to be an atypically spooky episode. This means that I could review that episode of "DuckTales" with all the classic Universal monsters, but not an episode of the "X-Files" as the majority of those episodes were spooky.

I'll make no promises about how often these will get posted, but I hope to have at least three up by Halloween.
Posted by Mike Podgor at 5:30 PM No comments:

Quickly Running Out of Ways to Title These

Another episode of Fringe, more letters in the sky! Hm... perhaps I should start actually talking about the episodes, as well? Well, so far, we've got two FBI agents and a father/son science team as the protagonists. In previous weeks, they've dealt with some guy who made explosions and chemical weapons, some sort of clone, and mentally broadcasted terrorist attacks. All well and good. The father/son scientist team are pretty decent, I think. The father (Doctor Walter Bishop) was in an asylum for seventeen years and is somewhat responsible for a lot of the fringe science stuff going on. The son is a shiftless wanderer who is, nevertheless, really smart. I think his name is Peter. The FBI agents are Olivia Scott and Astrid. We know nothing about Astrid. Olivia is new to investigating the fringe science things. She's going to end up with Peter, most likely.

Ah, the most current episode introduced the Observer, who is a man who seemingly can't feel or taste. He's in the photos of a lot of fringe science cases (referred to on the show as "The Pattern" cases) and he has no hair or eyebrows. I like him. Ah, there's also a bunch of rigmarole involving a vibrating cylinder and a guy with a really powerful gun. Oh, and the Observer might be psychic or something. A decent episode, really. Well, that's my muddled synopsis/review. Here's the letters in the sky: 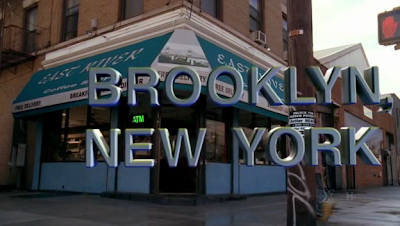 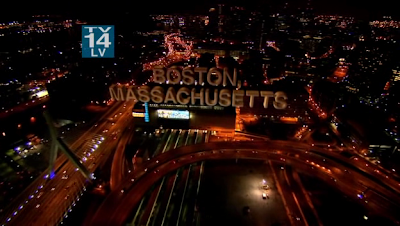 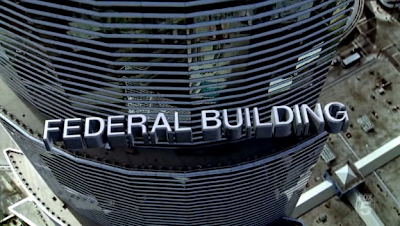 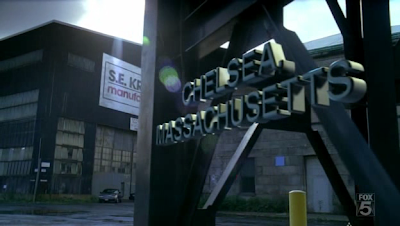 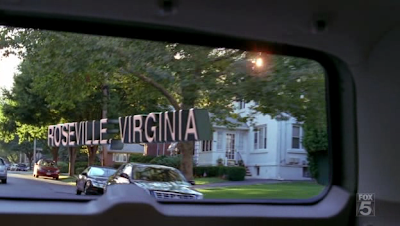 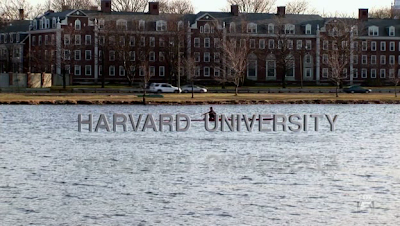 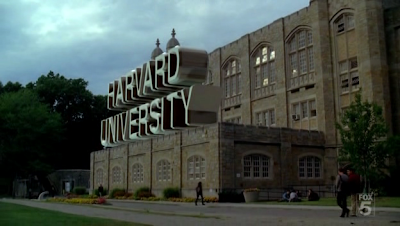 Posted by Mike Podgor at 5:25 AM No comments:

Labels: Fringe: Letters in the Sky

First off, I've gotten a new laptop. This only concerns you on a primary level, as with this new laptop, I can get images from DVDs. So I can review movies and whatnot now. This is spectacular news for me. Now, my backlog:

Comic Books:
Those ones I bought a while ago and posted about. Still haven't read any of them.

In case you're keeping track, I finished a book and two movies. I also bought Mega Man 9 and Kirby Super Star Ultra, and finished both of those.
Posted by Mike Podgor at 1:53 AM No comments:

Another episode of "Fringe", more letters in the sky. Only two in this week's episode, though, which is disappointing. 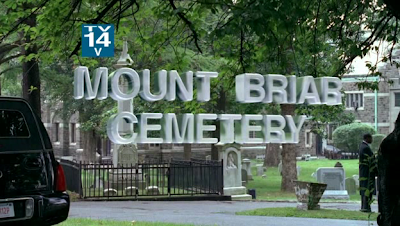 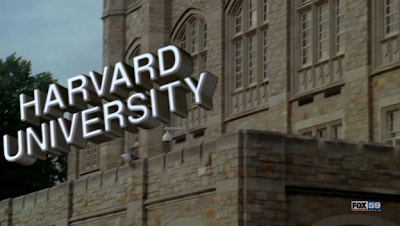 Posted by Mike Podgor at 2:27 AM No comments: